Dozens of Amazon Ring and Google Nest surveillance cameras were removed and destroyed this week from residential neighborhoods in Portland during nighttime walks.

The increasing presence of these doorbell cameras are a dangerous expansion of corporate spying and the panoptic surveillance state. The two reinforce each other, with Ring partnering with over 1,000 police departments to provide footage in bulk to law enforcement without warrants or oversight. Recently, even more troubling programs have began to allow police departments and other law enforcement to constantly livestream feeds from residents’ doorbell cameras, threatening to create a live surveillance network in residential neighborhoods, with a camera watching you from every door. Now is the time to fight back. 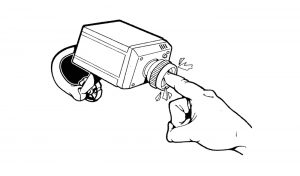 Removing these cameras is an easy and direct way to attack the reach of corporate and state surveillance, helping to keep folks safe from steadily rising techno-authoritarianism. Their destruction is simultaneously an attack on the corporate monsters of Google and Amazon, some of the companies most active in profiting off of the modern dystopian hell that they created and continue to create. Such an action is quick, easy, immediately effective and rewarding.

This is very easily done by just one individual, but is also well suited for a pair. If you go out walking with a friend, one of you can remove the camera while the other serves as a lookout for any passerby.

Doorbell cameras are easily removed with a small crowbar or pry-bar, or with a claw hammer, as long as the claw end is thin/tapered enough to fit between the camera and the wall it’s attached too. These tools are easily concealed inside of a jacket when not in use. A plain canvas bag was used to hold the removed cameras, and after a few cameras are removed, they can be easily destroyed with a hammer and disposed of at the bottom of dumpsters and trash cans, before continuing. 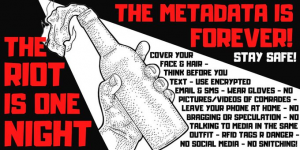 Because these are surveillance cameras, when taking such an action it is important to remember that you WILL be recorded. This is practically unavoidable. Accept this, and take precautions to ensure any footage cannot be used to identify you. Crimethinc’s piece “Fashion Tips for the Brave” provides a thorough guide to doing this. (Additional reminder that dressing in all black when not in a large black bloc will just attract extra attention if you pass someone, with the color choice not giving you any extra anonymity).

Good luck and have fun!

Blinding the Cyclops —Wrecking the Panopticon

You Are Under Surveillance