A few days earlier, Indigenous anarchist comrades had put out a public call for a night of decentralized attack against symbols of colonialism for the night before Thanksgiving day. For one group of anarchist troublemakers, one target in particular came to mind.

Since 1903, a bronze war memorial dedicated to the soldiers of the Mexican-American, Spanish-American, and American-Indian wars had stood high on a stone pedestal in the Lone Fir cemetery in Portland. This shameless celebration of American imperialism, colonialism, and genocide enshrined the image of a colonizing soldier in a grotesque display of nationalistic pride. This particular bronze colonizer had stood on his feet for far too long, and this night would be a great night to change that.

With the COVID-19 pandemic and cold, wet weather, few are out and about late, making nighttime direct actions all the easier to pull off without accidental witnesses.

The streets glistened wet with the light rain from earlier, and the waxing moon glowed through the clouds as the small crew of young anarchists met long after dark. Masked and dressed inconspicuously, wearing gloves to prevent leaving fingerprints, they carried with them everything they needed and nothing more. Sticking to the shadows of quiet side streets, they approached the cemetery. At a moment when the sounds of cars were only distant echoes, they helped each other over the spiked cemetery fence, and were quickly among the shaded headstones.

The crew moved towards the tall bronze statue that loomed large over the surrounding graves and walked a wide circle around it, ensuring they were alone. Time for action.

As one acted as lookout, others removed cans of spraypaint, and quickly covered all sides of the statue’s base with their thoughts on the monument. “EAT SHIT COLONIZER” in bold red letters was painted across the pedestal. Plaques celebrating the genocidal acts of the enshrined soldiers were covered with paint. Now he would fall.

One troublemaker was helped on top of the tall statue’s base, and they looped a thick, sturdy strap around the metal soldier’s neck.Hopping down, they joined the others, and all began to pull as one. Coordinating with quiet “heave, ho!”s, the statue began to bend at the base. Running around to the other side of the monument, they pulled it back in the other direction. Repeating this, back and forth, back and forth, the statue bent more and more, until with a strong tug against the strap on it’s neck, it was pulled horizontal. Still barely connected to its base, the anarchists pulled against the strap at an angle, twisting the statue against it’s foundation. They pulled it around by the neck until, with a crash, it broke from the pedestal and came tumbling down, face-first into the dirt. 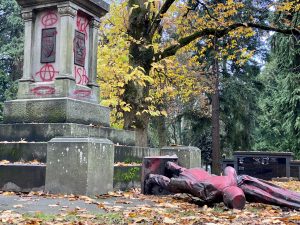 With adrenaline pumping, hearts racing, and the growing satisfaction of a job well done, the colonizer was covered with some red paint as it lay on the ground where it belongs. The strap, its role fulfilled, was removed from the downed soldier’s neck and placed back into an unremarkable backpack. One last satisfied look at a colonizer with his face in the dirt. Seemingly unnoticed, the young anarchists walked from the scene of their mischief, leaving only the destruction of their actions behind.They helped each other back over the fence, and vanished again into moonlit streets, for the city is big and the night was still young…