Submitted Anonymously
Earlier this morning an assortment of natives and accomplices associated with Lewis & Clark College in “Portland, Oregon” scrawled messages across campus in an act of rage.
Columbus Day is going through a rebrand, but are not interested in this wordplay. We want an opportunity to rage, to feel the anger and sadness of 529 years of catastrophe.
This educational institution is not only built on stolen land but it is actively celebrating the two people most responsible for bringing the genocidal practices of the United States to this corner of the world. The student body is called the “Pioneers”, a name that should be shameful, as US pioneers were the foot soldiers of imperialism and colonization. 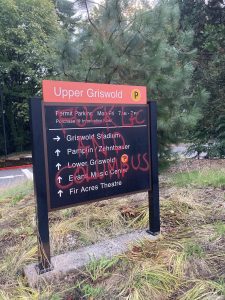 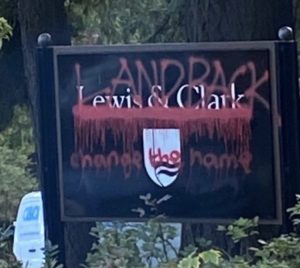 The tags thrown up addressed this history, and some of it called for a name change to the institution, something many people have pushed for for a long time. We believe a name change to be the bare minimum this institution could do to stop celebrating genocide.
Many liberal students have already begun discussions about “property damage” and “this not being the right way”. Fuck you, there is no right way to express rage and grief. The school has more than enough money to pay some graffiti-cleaning contractor to clean up a little paint (and no, it was not the non-white cleaning staff that did it, it was some white contractor). Sorry your feelings got hurt, but we don’t know our ancestral practices or languages and our rivers have been poisoned thanks to your civilization and progress.
In addition, peaceful protests, petitions, and student council are useless. They have been tried for over a decade, with no success. Standing with signs is boring and ineffective. You know what’s fun and effective? Acting in the dead of night. Campo can’t be everywhere! 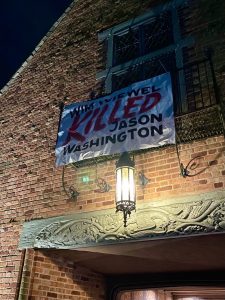 Finally, we want to remind both Lewis & Clark affiliates and the broader Portland population that Wim Wiewel is currently president of this college. He is notorious for single handedly ensuring that the PSU Campus Police were armed. We hold Wim Wiewel personally responsible for the murder of Jason Washington.
Wim has attempted to defend himself by saying that PSU police have disarmed. This is a lie, they “committed” to disarming, but haven’t. He is also making $400,000 dollars a year and has a house and car provided by the school (plus retirement fund and health insurance). He could use some of that fucking money (and his clout as former president) to force PSU to disarm, or donate it to those who need it more than him. But he won’t.
We’ll be happy when he’s gone, and we’ll give hell to the next president, too.
Kill Lewis. Kill Clark. Kill Columbus.
Long live the night.