With extensive review, it appears that the Portland Police Association (PPA) is still using their office at 1868 N Lombard St. This is a collection of intelligence gathered primarily by crows local to the Portland area, though some various other critters may have also been involved.

Anil Karia’s car, a 2020 Mercedes Benz C (Oregon license plate: 9Y9859), has also been confirmed at the PPA office. Anil Karia is a lawyer and lead negotiator for the PPA and boasts representing “over 50  officer involved shootings and in-custody deaths.​​​​​​” On multiple days the crows observed activity in the building, suggesting it remains active. On 1/26/21 it appeared that hired workers installed a new surveillance system. Additionally, several people in business attire were seen entering through the side door on N Campbell Avenue at the start of business hours. This was conveniently the day before the next scheduled contract negotiations on 1/27/21. Brian Hunzeker was present during that time.

Let’s compare a photo of inside the PPA building on 5/13/14 with a screenshot of the PPA contract negotiations on 1/13/21. Although renovations have occurred in the six and a half years, the rooms are the same. 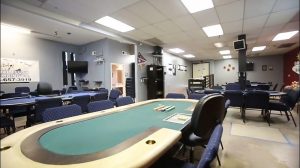 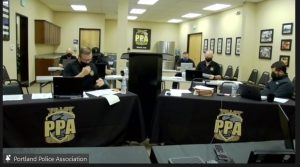 A simple search of publicly available ownership records shows the building permits for the internal renovations of the building which account for the minor structural discrepancies between the two photos.

The PPA continues to maintain ownership of the building and has, as recently as of 12/14/20, applied for building permits. 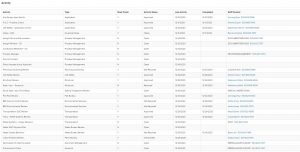 On 1/27/21, the date of the PPA-hosted second bargaining session between the PPA and the City of Portland, the building was bustling with activity.  Brian Hunzeker’s truck and Anil Karia’s car were identified outside of the building while contract negotiations were underway.

As per the rules of conduct between the PPA and the City of Portland, the PPA and the City alternate hosting bargaining sessions. All PPA hosted sessions are closed to the public while all City hosted sessions are open to public viewing via video call.  The PPA hosted the second negotiations and as a result they were private and obscured from the public.  The next public bargaining session will be on February 10th and zoom links are available upon reservation.

Brian Hunzeker’s truck and Anil Karia’s car were identified outside of the building while contract negotiations were underway.

Given this clear evidence, area wildlife have determined that the PPA continues to use the building located at 1868 N Lombard St, Portland Oregon, 97217.